-the following article by Katie Ritz was published on Aug. 30, 2020 by the Thoroughbred Daily News

Since the start of sales season last fall, comments have circulated on how Mastery could be the dark horse in his class of first-crop yearling sires.

There are many unknowns about the son of Candy Ride (Arg), as he may have never reached his full potential on the track when an injury forced him to retire prematurely. But his four-for-four career start had garnered talk of Kentucky Derby favoritism after dominating performances in the GI Los Alamitos Cash Call Futurity and the GII San Felipe S.

Now in the stud barn at Claiborne Farm, he’s gained attention early on in his career. His weanling average of $153,272, with 22 of 28 sold, placed him near the top of his class by weanling averages with a $25,000 stud fee.

His leading weanling, a filly named Shes Bout a Mover, is a half-sister to GIW Nereid (Rock Hard Ten) and sold to agent Andre Lynch at the Keeneland January Sale for $365,000. Earlier in the season, a colt out of Native One (Indian Charlie) and from the same family as GI Breeders’ Cup Sprint Champion Mitole (Eskendereya) sold for $325,000 at the Fasig-Tipton November Sale.

“He’s one of two stallions that stood out to me from the group of first-crop stallions at the sales last year,” said Stonehaven Steadings’ Aidan O’Meara. “The Masterys have a little more frame and size to them than I would have expected with the sire line. He’s a decent-sized horse himself and after what he did in the San Felipe, we never got to see him do a whole lot more, but the raw brilliance was there. He’s been producing the physicals that people are looking for and is putting himself in a good position going forward to be the real deal.”

O’Meara found one Mastery weanling at the Fasig-Tipton November Sale that he couldn’t leave without. Stonehaven Steadings went to $240,000 for a colt out of the stakes-placed Broken Vow mare Janis’s Joy.

“I thought he was one of the top three foals I saw last year,” O’Meara said. “We loved him. He was a big, beautifully-framed foal and looked like a horse with a lot of potential going forward.”

The yearling is now slated for the Keeneland September Sale as Hip 1021.

“He’s developing into the horse you hoped he would,” O’Meara reported. “He’s a big, two-turn colt. He’s a magnificent physical specimen and mentally, he’s solid as a rock. He has that intangible, special way about him that separates your average good-looking horse with something that has legitimate class. He’s probably going to be our top physical at the sale and will be a standout in Book Two.”

An additional 67 Mastery yearlings are catalogued for the Keeneland September Sale. At the Fasig-Tipton Selected Yearlings Showcase, 14 of his offspring will be featured including Hip 194, a filly out of GIW and stakes producer Last Full Measure (Empire Maker), as well as Hip 350, a filly out of GI Breeders’ Cup Filly and Mare Turf Champion Shared Account (Pleasantly Perfect) and a half-sister to last year’s GI Breeders’ Cup Juvenile Fillies Turf winner Sharing (Speightstown).

Claiborne’s Bernie Sams spoke on the quality he saw in the mares from Mastery’s first books, and how that has reflected onto this first class of yearlings.

“We bred 139 mares to him the first year, and a couple mares that were in there were the dams of Sharing and of Monomoy Girl (Tapizar). So he got good support for a horse that stands for $25,000. I’ve gotten good reports on the yearlings and the few I’ve seen have been really nice. They’ve been very athletic, well-conformed, a good size with plenty of bone to them.”

Sams said that an additional 143 and 137 mares were in Mastery’s next two books.

“He’s been very popular with the breeders,” Sams said. “He’s a good-looking horse, obviously he’s very much Candy Ride. I think people like the pedigree.”

His dam, Steady Course (Old Trieste), was picked up by Arthur Hancock for $20,000 at the 2009 Keeneland November Sale.

“She was barren at the time, but it’s a really good family and she was a big, strong, good-looking mare,” Hancock recalled. “I thought I’d probably have to pay a little more. I actually came to find out Garrett O’Rourke at Juddmonte was going to bid on her, but he got stuck in traffic.”

A few months later, Steady Course’s first foal Clear Sailing (Empire Maker) became a stakes winner, but Hancock didn’t have much luck with the mare in her first few years at Stone Farm until he bred her to Candy Ride in 2013.

Hancock noted, “My dad had a saying, ‘A good bull is half your herd, and a bad bull is all of it. I wanted to breed her to a good bull and Candy Ride is a good stallion. Mastery was a grand-looking foal.”

Mastery sold for $425,000 at the Keeneland September Sale to Cromwell Bloodstock as agent for Everett Dobson’s Cheyenne Stables.

He was sent to Bob Baffert and burst onto the scene when he broke his maiden on debut by over four lengths in October of his 2-year-old season. He continued on by taking three consecutive graded stakes wins in the GIII Bob Hope S., the GI Los Alamitos Cash Call Futurity and the GII San Felipe S. by over a combined 15 lengths.

“He became a really good racehorse,” Hancock said. “I think Baffert thought he had a big shot to win the Derby until he got an injury and went to stud after that. And now, we wait and see what happens.”

While it won’t be a long wait before Mastery’s progeny have the opportunity to prove their worth on the track, Hancock patiently monitors the development of Mastery’s full-brother who was born in late May this year.

“He’s a really nice colt and his looks speak for themselves.” Hancock nods to the rolling pasture of his Stone Farm and said, “He’s always running around out there and who knows? These fields here, not me but these fields, have raised three Kentucky Derby winners, two others who were second and seven who were in the Derby. If I stay out of his way, maybe he’ll develop into something.” 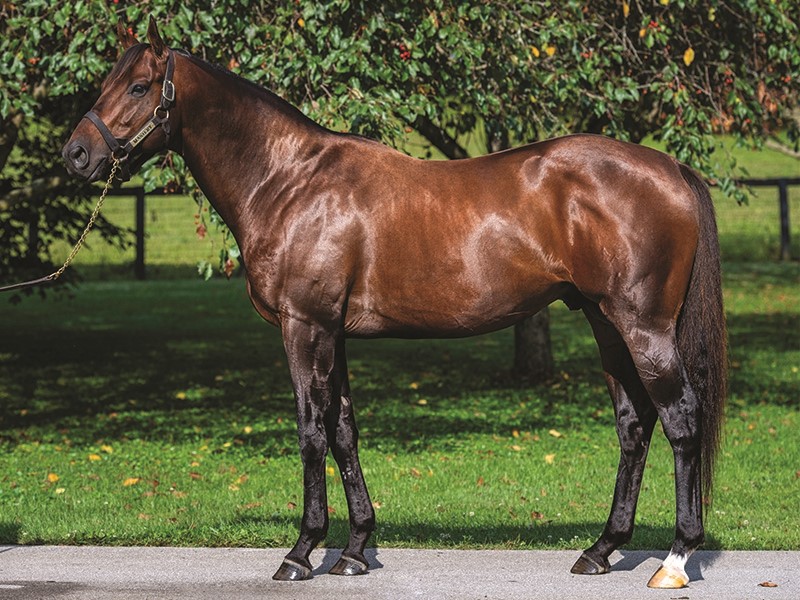