Olympiad delivered arguably his best performance to date in the $750,000 Stephen Foster S. (G2) on July 2 at Churchill Downs, dominating a classy field to win by 2 ¼-lengths.

Olympiad has now won five straight races, the last four in graded stakes, dating back to January. His last loss came in the Cigar Mile (G1) in December to Americanrevolution, who would finish second in the Stephen Foster.

Saturday’s Foster victory also secured Olympiad a starting spot in the 2022 Breeders’ Cup Classic (G1) as part of the Breeders’ Cup ‘Win and You’re In’ program.

The field was tightly bunched in the first furlong, but sorted itself out as Olympiad sat second behind Caddo River through sharp early fractions of :23.05 and :46.45. Olympiad edged closer around the final bend, took command at the top of the stretch, then drew clear impressively to stop the timer in 1:47.66, less than a half-second off the track record and good for a career-high Beyer Speed Figure of 111.

“I thought it was a very game win this afternoon,” winning trainer Bill Mott said. “There were some nice horses in this field and I thought he did things rather easily. It was really nice to see him win like that. We’ve always thought about running him in the [Aug. 6 GI] Whitney [at Saratoga], so I think that would be the next possible target.”

Bred in Kentucky by Emory Hamilton, Olympiad was a $700,000 yearling at the 2019 Keeneland September sale. 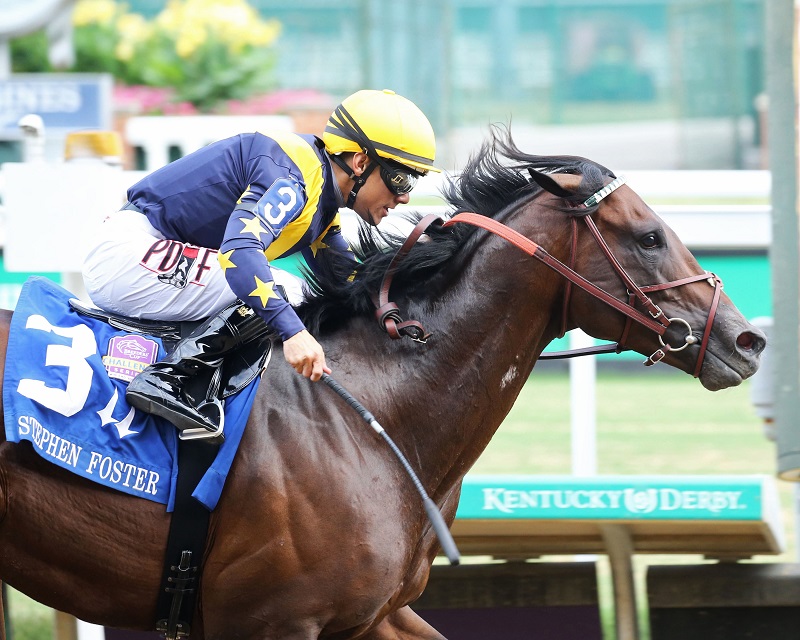 Olympiad powers to victory in the 2022 Stephen Foster S. (G2) - Coady photography
« Back to News