Opry, trained by Todd Pletcher, was making just his second lifetime start, and first on the turf, after finishing a good third in his Saratoga debut on Aug. 11. Half of the 12-horse field scratched, leaving Opry in post five. After an awkward break, he found himself some eight lengths off the lead after the first quarter mile.

Javier Castellano looked content with his position, and it wasn’t until just before entering the stretch, when he swung five-wide, to commence his big rally. Gaining with every stride, the dark bay really accelerated in the final sixteenth, rolling by the leaders to win going away by 1 1/2-lengths.

“He broke a bit slow out of the gate, but he didn’t panic,” Castellano said. “This was his second start and first time on the grass. I wanted to let him figure it out by himself a little, and this is a nice horse. Todd told me in the paddock that he really liked this horse and the way he’s worked on the grass. After the wire, he continued to gallop out past the field. I think this is a horse to look out for in the future on the grass.”

“I’d been impressed enough with his turf works to think it wasn’t crazy to enter here,” added Pletcher. “For now, we’ll look to stay on the turf and see what he does.”

The winner’s share of $82,500 upped Opry’s earnings to $92,700. By Declaration of War out of That Voodoo Youdo, Opry is a half-brother to the multiple stakes-placed filly Gris Gris. 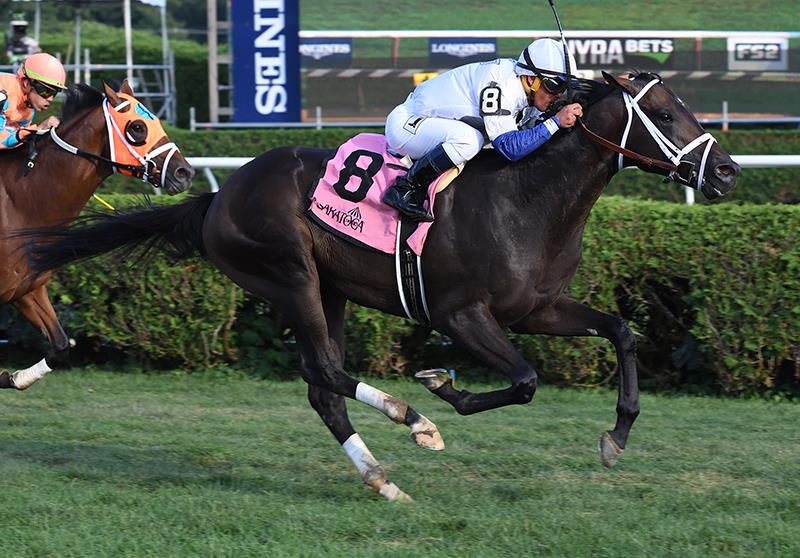 Opry rolls to victory in the With Anticipation S. (G3) - NYRA photo
« Back to News