Scalding scored his third straight victory in Saturday’s $100,000 Challenger S. at Tampa Bay Downs, holding off Cody’s Wish to claim the winner’s share by a neck in the 1 1/16-mile race.

Owned by Grandview Equine, Cheyenne Stable LLC and LNJ Foxwoods, Scalding has won three straight races and is 3-1-0 in five starts and has earned $124,800.

Scalding was making his stakes debut Saturday after reeling off maiden and allowance wins over the past two months. He broke well from post six and was third after a quarter-mile in :23.53. He held his spot a couple lengths off the lead down the backstretch, then close ground around the turn to be within a half-length of the top spot at the head of the stretch. In the final furlong, Scalding out-fought Cody’s Wish to hit the wire first in 1:43.53 on a fast track.

“It’s a big job going from an allowance/other than condition to this spot, but we’ve always liked this horse,” trainer Shug McGaughey said. “He has been training forwardly and from what we saw today, his future is definitely [bright]. He had a race over the track, and I think that probably helped him. He is a pretty talented number and his last two races had been so good, with a little encouragement from the owners, we decided to take a shot, and it worked.” 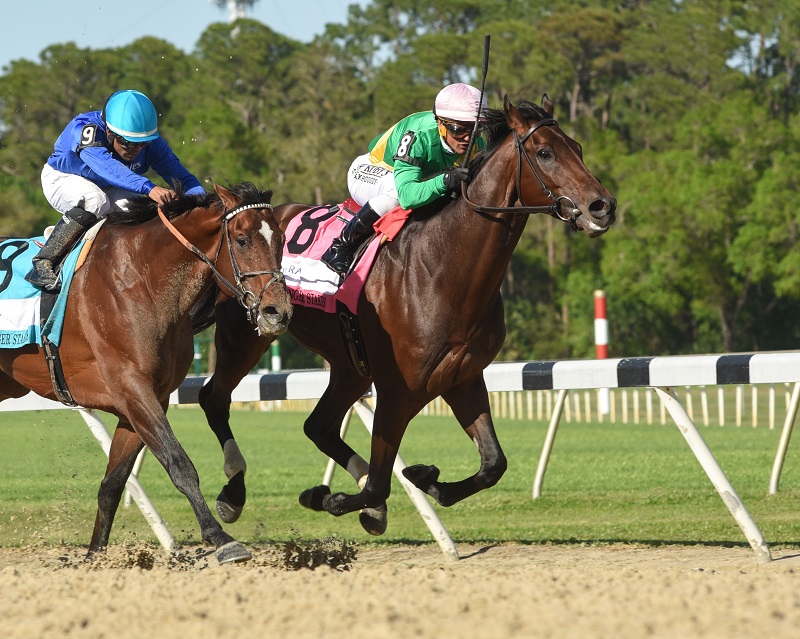 Scalding, at right, carries the Cheyenne silks to victory in the 2022 Challenger S. at Tampa Bay Downs - SV Photography
« Back to News